TMDB (The Movie DataBase ) is a large open internet database you can use to search for movies, tv shows, and people in movies. It also has a web API.

Fast video cataloger is a software to organize video clips so you can quickly search, browse, and find what you are looking for.

Before we can start you also need to create a free account at TMDB that you can get from here, When you have your account to go your profile, click settings and find the API tab and request a developer API key.

Place the downloaded scripts get_actor.xaml and get_actor.xaml.cs in the script folder of your fast video cataloger installation.

Open the get_actor.xaml.cs and fine the line near the top that reads

and replace the empty api_key string with your TMDB API key.

To run the script in Fast video cataloger open the Script console window. In the window click on the Load button and load the get_actor.xaml.cs script. Click run and you should see a window like this: 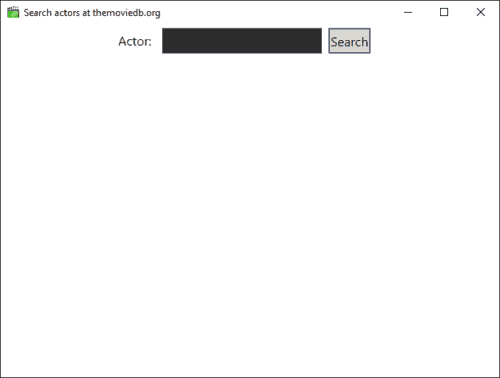 Search for an actor and you should see something like this 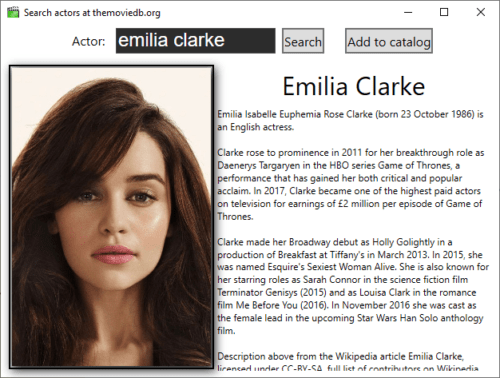 results of a search in the movie database

The C# script that is running uses WPF for the user interface. The user interface is defined in the XAML file. We use the rest API for TMDB. You can find full documentation for it here

Note that this sample just uses a minimal subset of the TMDB API. But, the principles are the same for the whole API, and it should be pretty easy to extend this with more functionality. For example, getting poster images or searching for movies.

Another difference to most other Fast video cataloger samples is that this one uses async programming which is needed for the web APIs.

At the very top of the script we need to add our external references. This is what normally would go into “references” in a visual studio c# project. In a Fast video cataloger script you use a comment in the format of :”//css_ref [dependency]”.

WindowsBase, PresentationCore, and PresentationFramework are needed for the WPF user interface. System.Runtime and System.ObjectModel has the c# code we need to access and parse the web API.

At the top of the script, we have a few static variables. The important one here is again the api_key variable, here you need to fill in your key as mentioned earlier.

Run is the entry point of all scripts running from Fast Video cataloger:

The only thing we do in the entry function is to save the passed in scripting interface and then create the GetActors WPF window and show it. We intentionally call Show() and not ShowDialog() since we want to be able to bring up the actor window in Fast video cataloger when we have this window open.

In this example, we have put all code in the HelloWindow class. This has the same structure as the basic HelloWpf.cs sample.
The constructor loads the XAML interface definition and sets up the window. It also establishes the connection between the buttons and their click functions (unfortunately we do not support binding directly in the XAML as the XAML file is loaded through the script engine ).

When the search button is clicked we will get a callback to Search_Click(…). This is the main function that performs the search. We first fetch the text the user entered in the search box.

Then we call SearchActors asynchronously and expect to get a CPersonSearchResult back, more on that later.

After that, we have to check if we got a search hit. In this example, we only care about the first result but you can of course list all the results and let the user pick one of them.

We have our first actor and pick the name. We then call MakeProfileImageUrl(…) to generate a URL for the profile image. We call GetImageData(…) to get the image from that URL.

At this point, we have most of the data we need.

We create a new Actor class in the Fast video cataloger format and store that in m_CurrentActor. We fill in the data members with data from the search and the downloaded portrait data.

Next, we call GetPerson() with the TMDB id for the first actor. Once we have done that we have all the data we need from TMDB.
We create a WPF image from the downloaded image data and call SetActorToUI() to update the user interface.

This function simply updates the user interface from the variable we have designed. The portrait is set to the image, the name and the description is set. The XAML file defines the whole layout of the user interface including size and positions of elements and fonts.

If you click add to catalog after you have searched and found an actor you will get a callback to AddToCatalog_Click(…). Here we simply get the interface to the video catalog and call AddActorToDB() with the m_CurrentActor we filled in earlier when we got the search result.

First, we create the URL that we will use to access TMDB. It always starts with the base URL and then the API we want to use and some arguments. Among the arguments, you always pass in your API key. We then use this URL and call one a utility function, GetFromJSON(), we have in the sample code. This function takes a class argument, which is of type of the JSON file we want to get from the URL. And, it returns an object of that class or null if it fails.
Let us take a closer look at that utility function.

GetFromJSON() is an asynchronous function that you pass the class of what you want to read from the query string. There is some initial setup and then we call GetAsync( query ) that will asynchronously call the URL and get the result. Once we have the result we read the data from the response message as a string. We then create a memory stream to the string data and create a DataContractJsonSerializer object to parse our data from the JSON data and create the C# object.

If you want to use other parts of the TMDB API you need to create classes for the data that are returned by the functions.

The SearchActors() function is very similar to the GetConfiguration() function but it uses the search/person API. We pass the api_key but also some extra arguments.

One of the arguments is a query string, this needs to be URL encoded to handle special characters like spaces.

Then again, once we have our URL, we simply use the GetFromJSON() utility to read the result into the CPersonSearchResult class. This class includes info about how many results you have from your query and some basic information about each result returned in an array of class CActorResult. Here you have the name of the actor, an id that we can use in other API calls and a profile_path. Profile_path is needed when you want to create an URL to fetch the profile picture.

MakeProfileImageUrl() is a utility function that is used to generate an URL to a profile image. For this, we need the configuration data where you have the base_url for all profile images. We need to decide on the size of the image, the different types of sizes are also listed in the profile image, and then finally we need the part of the URL that is unique for every actor. Once we have this URL we can just get the data.

GetImageData() takes the URL from MakeProfileImageUrl() or really any image URL in the TMDB image URL format. We again use the WebClient API and call DownloadDataTaskAsync(). This function will asynchronously download the image data to an array. This is the right format we need to pass to Fast video cataloger. But we need one more step to display it in the WPF user interface.

LoadImageFromStream() takes a memory stream to the bytes we loaded with GetImageData() and create a BitmapImage object from it. This object can then later be assigned as a source to any Image element we have in our XAML user interface.

I have shown how you can expand on the functionality of Fast video cataloger with web API. In this example we used TMDB but there are tons of other web APIs that might be useful and my hope is that this sample will make it easier for you to get started.