Yesterday we released version 3.20 of Fast video cataloger. When I release a new version with important enough changes, I always try to send an email to our customers to let them know about the update and that they can get it for free.

This time, almost immediately, I got this email back from one of our Norwegian customers:

“My antivirus program (Norton) wrote that this program (fvc_320.2xe) was a threat and removed it. The threat was named: WS.Reputation.1”

It’s really great that he took the time to let me know, but terrible that Symantec’s Norton antivirus gives a false positive. Norton is pretty expensive compared to their competition, and since it slows down your computer so much i stopped using it years ago ( If you are interested, the Antivirus I currently use is AVG ).

First thing, lets check if this is detected as a virus by other virus scanners.

Virus total is a pretty good online virus scanner. You can upload a file to test and it runs the file through more than 50 different virus scanner. Here is the result from running my executable through their service.

So, not detected as infected by any of the 52 virus scanner, that is a pretty good indication that its not infected.

I guess there is a remote possibility that this is a new virus and Symantec’s antivirus program was just first to detect it. So after some digging around i found this:

“WS.Reputation.1 is a detection for files that have a low reputation score based on analyzing data from Symantec’s community of users and therefore are likely to be security risks. Detections of this type are based on Symantec’s reputation-based security technology. Because this detection is based on a reputation score, it does not represent a specific class of threat like adware or spyware, but instead applies to all threat categories.

The reputation-based system uses “the wisdom of crowds” (Symantec’s tens of millions of end users) connected to cloud-based intelligence to compute a reputation score for an application, and in the process identify malicious software in an entirely new way beyond traditional signatures and behavior-based detection techniques.”

So what this is basically saying is that not many people has run this current executable before… Duhh, its a new file, I just compiled it, this is always going to happen!

So either their detection is using some type of hash ( unique way to encode the executable as one large number ) and checks how many people have run that file. In this case this is going to happen whenever I release a new version as it can not have any prior reputation.

The other option is that they encode the URL to the file. This will not trigger updated files except in my case since the installer is named with the version number and will always generate a unique URL whenever a new version is released. I do hope they don’t encode that URL as that would be terrible –  any new infected file would not trigger the alert.

Anyway, if you get this error with Symantec’s Norton antivirus just disable the virus program when you install the program. And, why not search for a faster, cheaper and not broken antivirus program in the process (and anyone from Symantec reading this, do contact me and let me know how to avoid this issue.)

After some external testing and a few last minute fixes I have just uploaded the 3.20 version of Fast video cataloger.

This is a free update for all customers, just download and use your previous serial key.

The video wall is my new prefered view when browsing catalogs and the user layout is a small improvement that is really useful and once you get used to it, invaluable ( make sure to learn the shortcuts ).

There is also some internal Changes in how the program uses threads. In general it should improve performance on multicore CPUs (more threading), if you do have a problem please let me know, and feel something is not working as well in this version as in previous ones, do let me know.

All in all, I think you will find this a fine improvement to the program. 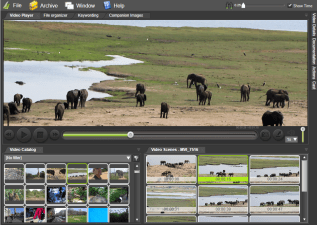 Save time with Fast video cataloger

The next new feature in Fast video cataloger will save you time when you are using a computer with one monitor like a laptop. You can download the program from http://videocataloger.com/download

The user interface in Fast video cataloger is highly customizable. Almost every feature in the program is accessed from a dockable window and you can pretty much setup the windows as you like, to suit what you are currently trying to do.

The program works the best when you can layout your windows across more than one computer screen. If you only have one screen, as I do on my laptop, it is really hard to find space for all the windows you want to keep open at the same time. Most of the times there is one window that is smaller than I would like it to be or one window that is taking space that I do not need at the moment.

In the 3.20 version, you have access to 8 user definable layouts and you can quickly switch between them using the function keys (F5-F12).

You can also set a name for each layout, from the preferences, to help you remember the purpose of each layout between program runs.

I have setup a layout for working with video files, here I have the video catalog and the file browser taking most of the screen space.

I have an actor layout where the actor and cast window get lots of space.

I have a video wall layout where the video wall window takes most of the screen, a research layout for finding info about videos using custom actions and so on.

There are a lot of different things you can use fast video cataloger for and often you want your windows setup just the right way to be most efficient. This new feature will hopefully save you time since you can keep your favorite setups between program runs.

Fast video cataloger has a new feature that will help you browse for videos faster than ever before. This is probably the fastest way possible to quickly browse and discover videos in large collections.

Right now I am putting the finishing touches to a new (version 3.20) update to Fast video cataloger with two major new features.

I’ll write about the first feature here today, the fastest way yet in Fast video cataloger to scan huge number of videos from your collection.

The new version will be out in a week from now. Most likely when you are reading this the new version is already available for download from https://videocataloger.com/download.

I call the new feature Video wall and it has its own window. You might have seen other video walls and this is close but still not quite the same.

The Video Wall window cycles through all captured video frames from the current selection of videos.

Since it is not playing the actual video but rather quickly cycling through your selected video frames it can cover a whole video in a matter of seconds, and you can add more frames yourself wherever it is needed from the video. In other words the frames does not have to be equally spaced throughout the video, where interesting things happen you can add more frames and where nothing of interest happens you can have few frames.

There are a bunch of other advantages of not actually playing the videos.

It can be done without having access to the source videos, for example if they are stored on an external device. Doing it this way is much faster and far more efficient than playing the video. First of all video formats are not optimized with the goal of being able to fast-forward through they are optimized to be played in order frame by frame. To use the actual video source would require a lot of extra data to be read and it would not work for some format. It would also require a bunch of memory and it would probably kill or at least severely burn you CPU.

With the new video wall window you can easily have more than a hundred videos playing.

The video wall uses several hardware threads and I spend quite some time to optimize it for performance. Actually the code is probably not how the text book says you should do WPF applications but the result is way faster than the first implementation that followed the book.

If you are using a laptop on battery you might want to hide the video wall window as it does put a constant load on the system preventing it from ever saving power.

The Video wall window can switch between the different size of video frames right click on a video and select Small, Medium, Large or Very Large view in the View submenu.

I am pretty happy with this new function, why not try it for yourself I think you will like it.