So what is new in this version? The largest change is probably an update to the docking framework which should fix a number of bugs as well as improve performance.

The “Find duplicate videos tool” has been further improved, Select “Clean” from the start menu. We also removed the old tool from the repair dialog.

And, finally, this is pretty small. We added a new shortcut to “refresh search” (Shift + Alt + R). This shortcut just refreshes the current search and is useful if you have added new videos to a catalog after the search.

A new version of fast video cataloger is available today to download from videocataloger.com/download. Fast video cataloger 4.4 is a program that makes it easy to create a local video clip database. Small to medium sized companies no longer have to manage and configure servers or signup to expensive monthly cloud solutions to leverage their video clip assets.

The 4.4 update of fast video cataloger is free for all customers.

This version does not have a lot of new big features. However, it has improvements to make it easier on new users and it has a number of fixes to reported issues.

In the past many new Fast video cataloger users think the program is intimidating at first. This has a lot to do with the focus we have in the software on workflows and efficiency. We want to keep the program as user configurable as possible and we always try to save on screen space. That does mean that the program can be a bit intimidating to first time users.

In the fast video cataloguer 4.4 we have tried to ease in new users with a new start dialog and a reworked tutorial. The start window clearly let you create a new catalog file or load a catalog. You can still let the program automatically load the last catalog with an option on the general tab in the preference dialog. When a new catalog is created you will get a “tutorial” to help you get started.

Among the other improvements…

In 4.35 we added support for Dropbox and OneDrive. The program will recognize video paths on these cloud drives and keep them correct if you move a catalog to another computer that share the same cloud account. We do not recommend you to put the catalog file on a cloud drive as the cloud syncing will risk overwriting changes.

We hope you enjoy this update and as usual do let us know what you think about the program and if there is any new features you would like to see in future versions. 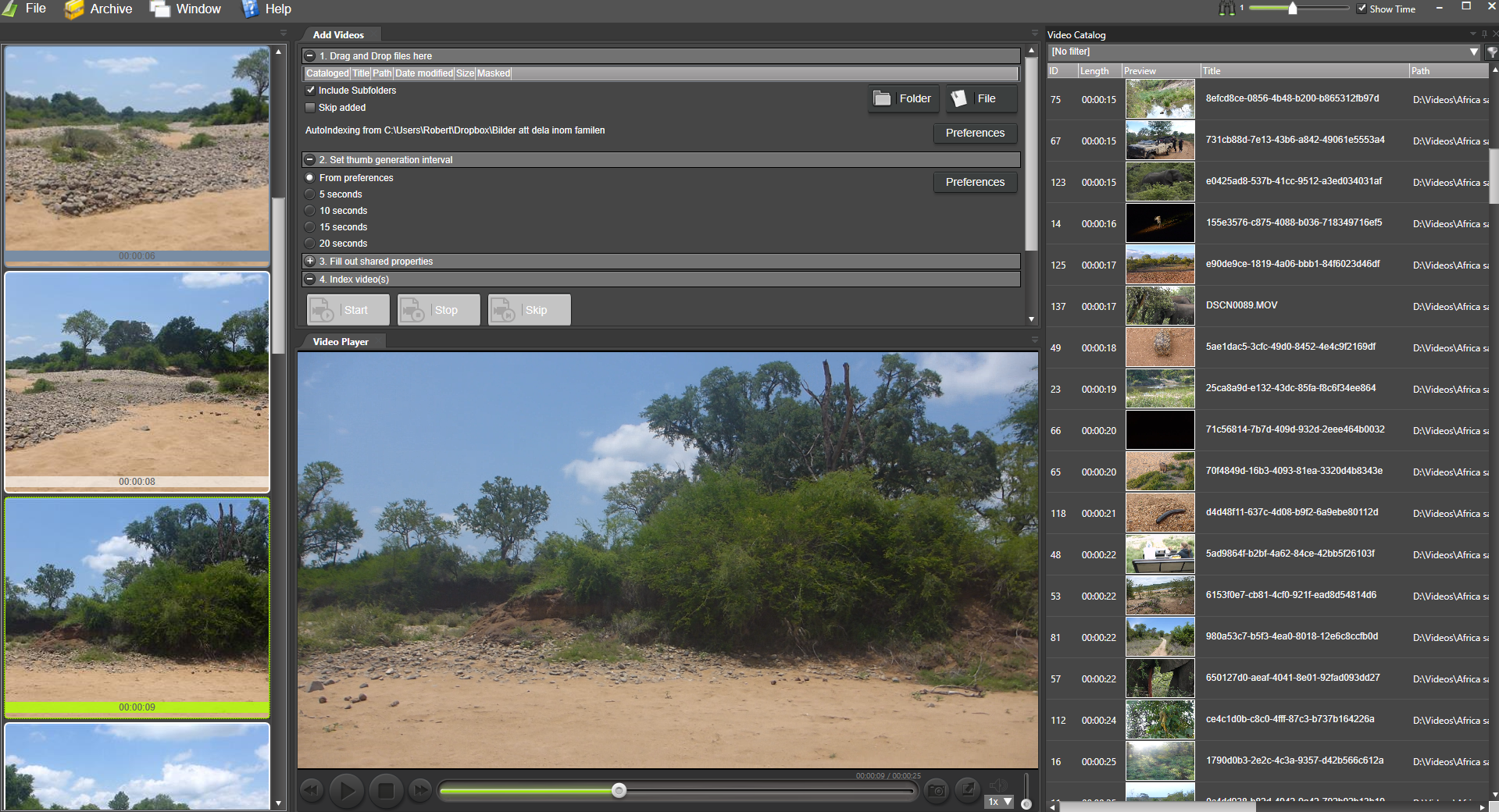 However, in this update we managed to get in quite a few important, and we think, really exciting new features.

If you for some reason want to do something in excel or some other external tool we now have the option to export videos and actors as csv files. The export function takes the currently filtered video collection so if you want to export your entire collection make sure you do not have any active filters.

Contact sheet images are great for overviews of a videos. It’s really the fundamental idea fast video cataloger is based around. In this version we added a new wizard to export the selected video as a jpeg contact sheet image. There are a lot of options and actually pretty entertaining to create the images so give it a try. The tool works with the already extracted images in your catalog so if you need more thumbnails add them to your catalog by re-indexing the video or add them with the “camera” icon or burst capture.

Import actors from a folder structure

If you store your videos in a folder structure based on key actors or if you have a folder structure with just actor data, this new tool should be really useful. The “import actors from folder wizard” scans a root folder that you pick for subfolders named as actors. In each subfolder it picks the first image as portrait. It also matches videos in the subfolders with videos in your catalog and set the actor as cast in these videos. We originally developed this tool to be able to help users that had problems with very large actor galleries and halfway through we noticed it was a really useful tool, we put in a wizard for usability and here it is. Do let us know what you think about it and if you miss anything, we always listen.

Backup is easy to forget, now it’s a bit easier to remember. We added a menu item to enable easy backup of your catalog.  The backup is taken to the same device so I highly recommend that you make backups to other devices as well from time to time. Disk crashes do happen and from time to time we have people reporting that their database has been corrupted (if that is the case and you do not have a backup please contact support, we might be able to help reconstruct your catalog)

Improvements to the indexing engine

Some users have reported issues indexing some videos, issues we have had a hard time reproducing. The problem was rare but for the people who had the issues it was a big problem, probably because they had lots of videos created in the way that caused the problem.

With the assistance of helpful users that provided us with problematic videos we have finally been able to track down this problem and made some improvement to the indexing engine. The videos failed indexing in the program regardless of the codecs installed. Hopefully this problem has now been fixed in 4.1x. If you have trouble getting videos indexed, give this version a try, it should work.

A big and special Thank You! to everyone who send us problematic video files and helped us track down this issue.

Some people have complained that the title bar etc. are taking too much space from videos. We have done a pass on the user interface to get rid of unneeded elements and make more space for your videos. You will immediately notice that the title bar has disappeared. Other changes are that the filters in the actors can now be hidden (and there are more subtle tweaks).

We have added a new option to optimize your catalog and make it faster. You can access it from the repair menu. You probably won’t see a noticeable change on small catalogs with less than a 1000 videos. Before running the optimization do make a backup and be prepared for the process to take a pretty long time (hours for very large catalogs). Do not interrupt the process when it is running.

Windows 10 anniversary update is just about to be released. We have tested this version on the preview of the update to make sure it works. We have also updated the program to use the latest version of the .net runtime. (For whoever interested, we use C# and .net for the GUI and C++ for the indexing and video player ).

And, we have a bunch of minor improvements and fixes too numerous to mention but here are a selected few. The companion images now has a right click file menu and you can select to view companions in an external image viewer, more info in the video detail window, filtering now works as expected when filtering with many actor tags, sound volume in the player is saved between runs, scene search filters works better with more keywords, delete key now works as shortcut to remove a thumbnail, title of the catalog and actor window now shows the number of displayed items and much more (check the detailed version history in the documentation for a complete list ).

We hope you will enjoy this version and get even more value from your videos.

The 3.50 update is free for all customers and you can use your original registration information. We have lots of minor improvements and bug fixes as usual and there has been a focus on performance and workflow that should make a few common operations faster and more streamlined.

In the 3.50 version we introduced three new windows in a new category that I would like to call “Attract Windows”. The purpose of the attract windows are to cycle through content automatically from your video catalog. Just like with all other windows you can decide to use these windows, just close them or use them in specific layouts. My hope is that the attract window is a new inspiring way to enjoy your video catalog, perhaps to get inspiration.

For each attract window you can right click to get options to go to editable versions of the content.

A new tool to find duplicate video files was introduced. This tools makes it effortless to clean out duplicate videos from your catalog and optionally delete them and save some space on your disks. You can find the tool as a tab in the Repair windows.

You can now set volume even if a video is not playing. Also, the scale of the volume control is now much better and the whole slider is used.

General performance improvements. This one is hard to prove and explain but you will find that some operations, for example keywording, is much faster.

Fixed a bunch of issues with disappearing windows that required layout reset to reappear.

Added a Right click option to sync file organizer to video. This is good to have if you don’t have the automatic sync turned on. The automatic sync can cause performance issues if you have videos on powered down disk drives.

Right click option to remove a video file from disk and from catalog. You could do this before from the file organizer but since this is a pretty common thing to do when cleaning up a catalog, we added a menu option for it.

Option to show/hide horizontal video details horizontal scrollbar. With more columns a scrollbar is good to have but it does take screenspace. This might sound like a small thing and it is, but I have had emails from users that wants it there and users that hate that it is there. So now everyone can set it up as they like it.

Copy from actors, just right click the actor portrait to copy it into the clipboard. Might be useful if you edit portrait in Photoshop or another image editing program.

Support to enter multiple keywords at once with , separation.

Added message when you switch between layouts to make it more clear that you did switch to a new layout. Remember that you can set name to the layouts as well from the preferences.