The release of Fast video cataloger 5 is getting closer. Today I want to talk about perhaps the biggest and most powerful feature we have ever added to the program. This is not for everyone but if you are an advanced user this it can be a true game changer.

We added true support for scripting to Fast Video cataloger. 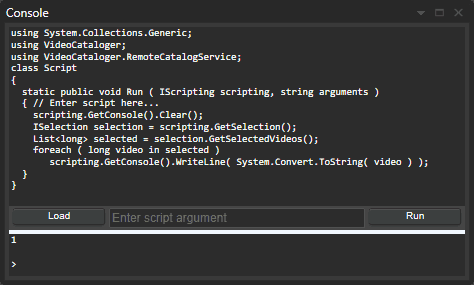 I decided to use C# as a scripting language after careful evaluation. C# is a very powerful language and one of the language we have used to write Fast video cataloger (We use C, C# and C++). With the new scripting support you can extend the program to optimize workflows for your users and enable new workflows by integrating Fast video cataloger with other programs. Since the scripting language is c# you can also build on everything that is available in the .net library including building a graphical user interface for the extended functionality.
Scripting is introduced in 5 and you will have full direct access to the video catalog. In other words you can do everything with the catalog that Fast Video Cataloger does. We also provide access through script to part of the user interface. For example, you can easily check what video is currently selected and get data from that selected video.

We have no idea how this is going to be used but we do expect to continue to develop the scripting interface based on your feedback.

To run scripts we have added a new window where you can enter scripts and also print output from scripts to help debugging. The script window is obviously not the best place to develop scripts. We recommend one of the dedicated development environment like for example visual studio code where you get syntax highlights and so much more. However, the script window allow you to tweak scripts and to play around with the sample scripts we will release together with version 5.

We also made it possible to create new actions that launch scripts. That way you can your favorite custom scripts always one click away.

We would love to come in contact with users who wants to use the scripting support to make sure the API supports what you need. This is the initial release and we expect to expand this in future updates of the program based on yours and other feedback.