What is a video bin?

Video bin is a new feature that we added to Fast video cataloger 5.02. A video bin is a virtual video folder in your catalog. Just like a folder on your computer, you can add videos to it, and you can easily browse all videos in a bin.

Why would you want to use a video bin in Fast video cataloger?

We added bins to help with workflows and reduce the number of temporary tags. Our intention is that you should be able to use video bins for video favorite lists, for temporary storage when working with videos, as steps when you automate with scripts and more.

Many of these usage scenarios could be solved before with special keywords. For example if you wanted to convert a number of videos, you could add a keyword to all videos to be converted and then just remove that keyword when you converted the videos. Video bins is another, sometimes superior, way to do the same thing. In this example, create a folder “to be converted”, move all videos you want to convert to that bin.

What are the advantages of the bin workflow?

If you compare the above keyword workflow to the bin workflow, the bin workflow has two advantages. First you do not clutter your keyword list with temporary keywords, and an uncluttered keyword lists makes it easier and faster to find the keywords you need. R remember that you can use color on your keywords to make it even quicker to find the keyword you are looking for. The second advantage is that you can have the bin Window open at the same time as the video catalog. That way you can easily use search to filter videos, and just drag them over to the bin step by step.

Ok, how to I create video bins?

Open the Bins Window from the windows menu. 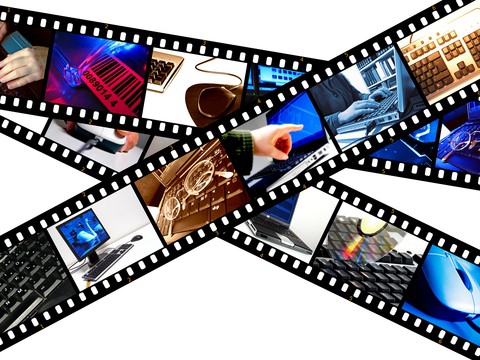 what is so great about fast video cataloger

Users liked that Fast video cataloger support very speedy indexing of video files. By indexing we mean automatically extracting video thumbnails from the videos to give an “at the glance” overview of videos. Users give batches of video files to the program for processing in the background. They may tag all videos in a batch with common keywords, ie. tags are automatically applied when the video has been indexed and added to the catalog.

Play from any thumbnail

In Fast video cataloger you can play videos starting from any of the video thumbnails in the catalog. You have the option to add unlimited, new thumbnails at any point. This can be needed when the automatic indexing haven’t added all the frames needed for the best representation of the video.

Users liked the ability to tag individual video frames and the ability to search for tagged frames across an entire video catalog. Scene search shows specific thumbnails across multiple videos and allow users to play right from the thumbnail.

Fast video cataloger is a pretty large program with a bunch of different windows. But users like that they can arrange the windows as they like across one or more monitors to setup a customized optimal workspace.
Download your own free trial version from https://videocataloger.com/download/ and see if you like Fast video cataloger yourself. Fast video cataloger is available for windows 8.x and all the way back to Windows Vista. We wil off course make sure it works perfectly on the upcoming windows 9 as well.  It makes use of multiple cpu cores when available.

Fast video cataloger has a new feature that will help you browse for videos faster than ever before. This is probably the fastest way possible to quickly browse and discover videos in large collections.

Right now I am putting the finishing touches to a new (version 3.20) update to Fast video cataloger with two major new features.

I’ll write about the first feature here today, the fastest way yet in Fast video cataloger to scan huge number of videos from your collection.

The new version will be out in a week from now. Most likely when you are reading this the new version is already available for download from https://videocataloger.com/download.

I call the new feature Video wall and it has its own window. You might have seen other video walls and this is close but still not quite the same.

The Video Wall window cycles through all captured video frames from the current selection of videos.

Since it is not playing the actual video but rather quickly cycling through your selected video frames it can cover a whole video in a matter of seconds, and you can add more frames yourself wherever it is needed from the video. In other words the frames does not have to be equally spaced throughout the video, where interesting things happen you can add more frames and where nothing of interest happens you can have few frames.

There are a bunch of other advantages of not actually playing the videos.

It can be done without having access to the source videos, for example if they are stored on an external device. Doing it this way is much faster and far more efficient than playing the video. First of all video formats are not optimized with the goal of being able to fast-forward through they are optimized to be played in order frame by frame. To use the actual video source would require a lot of extra data to be read and it would not work for some format. It would also require a bunch of memory and it would probably kill or at least severely burn you CPU.

With the new video wall window you can easily have more than a hundred videos playing.

The video wall uses several hardware threads and I spend quite some time to optimize it for performance. Actually the code is probably not how the text book says you should do WPF applications but the result is way faster than the first implementation that followed the book.

If you are using a laptop on battery you might want to hide the video wall window as it does put a constant load on the system preventing it from ever saving power.

The Video wall window can switch between the different size of video frames right click on a video and select Small, Medium, Large or Very Large view in the View submenu.

I am pretty happy with this new function, why not try it for yourself I think you will like it.