Video cataloger 5 lets you do video keywording in color. 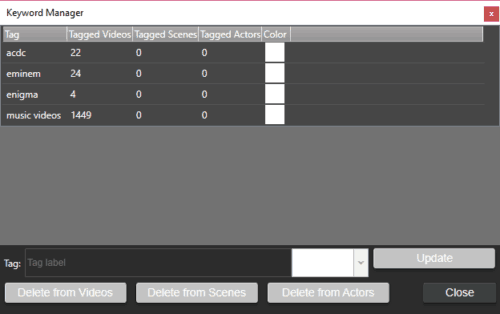 Over the years we have had several requests where users wanted to remove keywords from their catalog.

In the keyword management dialog you will be able to see statistics on how each of your keywords are used. You can rename a keyword in one place, and the change will be propagated to everywhere that keyword is used. This has been a common request from users who have discovered a misspelled keyword that’s been used on a lot of videos. Hopefully, this new feature will save time.

Another new feature in the keyword dialog will let you quickly remove a keyword from all videos where it is used. Just click a button, and the keyword will be removed from the entire database. But as always, don’t forget to make regular backups of your catalog from time to time. There is no way to get back keywords once they are deleted.

Finally, we added colors to keywords!

You can set the color yourself from the keyword dialog. Colors are available for all types of keywords; video keywords, scene keywords and actor keywords. The default colour for new keywords is “white” but you can easily change that.

Coloring keywords give you an additional dimension of organizing, and with some clever use you should be able to quickly find the keywords you are using the most. Hopefully, this addition will allow you to work even faster with your video collection.