How to work efficient with video folders

Fast video cataloger is the best way to manage large local video collections. Metadata allow you to quickly search and find what you are looking for. This text will help you work smart and save time with video folders in Fast video cataloger.

Video metadata and the catalog

In Fast video cataloger, all metadata is stored in a video database called a video catalog. The metadata allows you to tag videos for searching, add descriptions to videos and quickly preview thumbnails from videos.

There are several reasons why keeping the metadata catalog separate from the actual video files is a very good idea.

In Fast video cataloger, the videos in the catalog are references through paths.

But… there are some issues with storing links to videos as paths that all boil down to the link can become invalid.

Fast video cataloger has a repair function that you can use to scan the catalog for broken paths and update them.

Recently we added a new feature in Fast video cataloger called special folders. They help you solve this problem much easier and quicker than before. 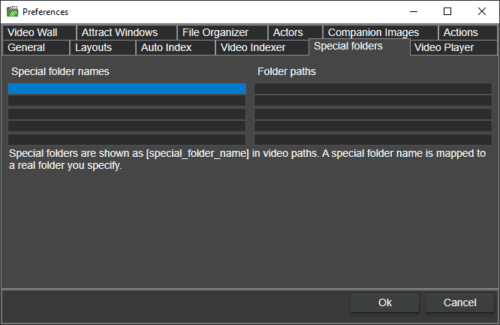 The first native special folder is [LOCAL]. Video paths starting with [LOCAL] are basically paths relative from your video catalog file. [LOCAL] resolves to the folder where your video catalog is stored. When you add a video to a folder that is stored in a subfolder relative to where your catalog file is, it will automatically be converted to a [LOCAL] path. This allows you to create a folder structure with your catalog in the root and all videos in subfolders. You can then move the whole folder structure to other folders or devices and all paths in your catalog will still work.

The second type of native special folders is cloud storage locations like [DROPBOX] and [ONEDRIVE]. They will automatically be used whenever you add videos from your dropbox folder if you have dropbox installed. The path for cloud storage is read from the Windows registry.

You can also create your own special folders. You can for example create a mapping called [EXTERNAL] to an external USB drive. After you have set that mapping up and you add video from that external drive it will be stored as [EXTERNAL]/path to video file. If you then at a later point need to move that drive to another drive letter you can simply update the mapping in preferences and everything will work as before.