Video codecs are integrated into the current versions of Fast video cataloger and are handled by the software. You should normally not have to care about video codecs. The case where you might need to care is if you have old videos using rare video formats or problems in general to index a specific video file.

What is a video codec

Video codecs are usually developed as filters. A filter is a code module that takes input streams, processes the stream and then provides the result in output streams. To decode a video you typically set up a graph of filters that work together. You usually have an input stream that reads the file format and passes the raw data to a decoder filter. The decoder filter decodes the stream and passes it onto a render filter. The render filter then renders the decoded stream to the screen.

Directshow has been along for a very long time in Windows. It is basically a system to create filters and allow applications to reuse these filters without knowing much about them. This, for example, allows an application to support rare video formats the author of the software did not even know about! By default, Fast video cataloger uses specific filters to make sure we have a software that works the same on all computers. 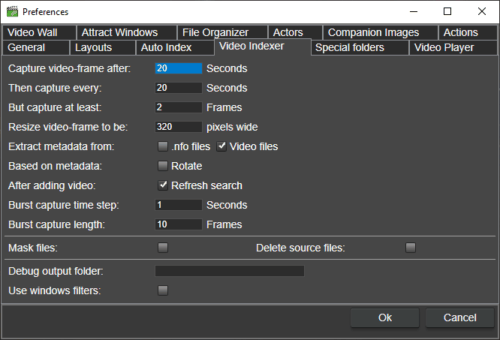 But, we support general directshow filters as well. If you have trouble decoding a video you can enable the general use of directshow from the “video index” tab and the “Use windows filters” checkbox. Then if you, for example, have software for a camcorder installed that uses some special directshow filter for its video format, it should be possible to index these videos in Fast video cataloger.