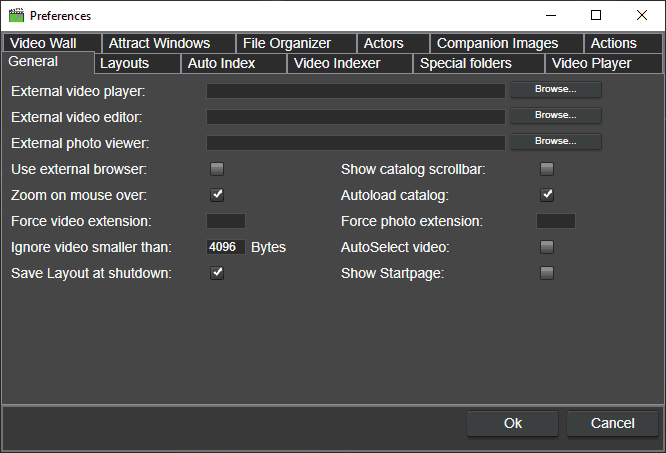 The General tab contains a number of general settings for the software.

Preferences in fast video cataloger can be accessed either by the CTRL+P shortcut or from the start menu.

Use external browser – Determines if links in the Video Details window should be opened in a window in Fast Video Cataloger or in an external web browser.

Show catalog scrollbar – If checked the Video Catalog window will get a horizontal scrollbar when in detailed mode.

Zoom on mouse over – When checked thumbnails will be zoomed in on when the mouse pointer hovers over them.

Force video extension – The extension entered here is treated as a video file. I.e. the program will try to index files with that extension and do everything else that it does to known extensions like avi or mp4.

Force photo extension – The extension entered here is treated as a photo file. I.e. the program will treat files with this extension just the same it does to jpg files.

Autoselect video – When the cursor is moved over the thumbnail in the video catalog window it will automatically select that video. When this option is enabled you can
temporarily disable the selection by holding the shift key.

Save layout at shutdown – Autosave layout to the current layout when the program closes.

Show startpage – Show the start page when starting the program.

The “Ignore video smaller than” is there to skip broken videos during index scanning. No video can be as small as 4k (the default settings). If you have files in the folders you scan that really is that small they are probably a file that failed to download or is corrupt for some other reason. If you can, re-download the file and try to add it again to the software.

There is an option to set the path to an external video player and viewer. Fast video cataloger can be extended much more than that. Actions can be set up to launch any external program with arguments based on selection. It is also possible to launch a script and bind it to a shortcut. And, the script can even have a custom user interface. There are plenty of samples in the script folder.

Fast video cataloger recognizes a very large number of video file extensions when you scan a folder for video files. You can also add videos as single files directly. The “known extensions” only matter for the folder scanner in the video indexer. If you have an extension the program does not yet recognize you can add the extension to the “Force video extension” settings for the folder scanner to find it. If you do discover files you would like the program to recognize please contact support. Even if the file extension is not known by a fast video cataloger it is very likely the program can still understand the file format either using the build-in codecs or through an external directshow codec.