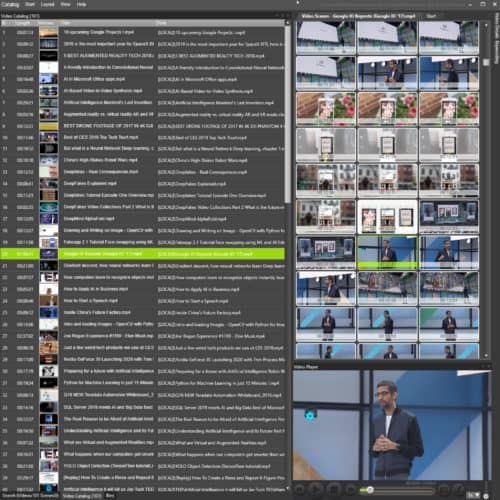 Browse through multiple videos in seconds. Click to make this screenshot larger

Adding new video clips and indexing scenes with thumbnails is easily done in the background while you continue to browse your clips. You simply point to the video clips and the program will do the heavy work. When video clips are ready in your catalog you see them pop up in your list of videos.

When a video is indexed and in your video catalog you can at any time add more video frames from any point in the video. just click the camera icon in the video player and the current frame playing will be added to the thumbnails for that video.

Some points in videos are more interesting than others. Fast video cataloger supports burst capture that lets you capture many thumbnails from a short period in a video. Simply right-click a thumbnail and select burst capture from that frame.

The thumbnail engine is based on DirectShow allowing it to support all major video formats, as long as codecs are installed. This includes much more than mpg, mpeg2, mpeg4, avi, qt, rt, wmv and flv. Fast video cataloger automatically extracts thumbnails from videos to give you a great overview. When adding video clips to your catalog you have the opportunity to keyword them all at once. This is really great if you are adding a lot of different batches of clips, you can always add more specific keywords later, even on every scene  if you wish

Fast video cataloger uses the same C/C++ code to extract thumbnails as Fast video indexer. This code has been refined over more than eight years to be fast, accurate and as fault-tolerant as possible (We can handle many different types of bad codecs and broken video files, not all, but likely more than other similar programs).

Indexing is run in a separate isolated process so even if there are codec issues with a video the indexing will continue to the next video automatically. Progress of the indexing queue is saved after each video so if your computer reboots the program knows where to continue.

Download the full trial version and build a catalog of your videos within minutes. We will not ask for your email we simply want you to try out Fast Video Cataloger

Get your copy now